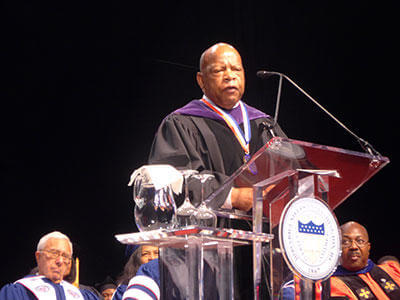 I am truly saddened by the news of the passing of Rep. John Lewis, a freedom fighter who never gave up the fight despite the forces he had to confront such as racism and white supremacy, opposition politicians, and disease. He was a role model for people who see problems in society and want to do something about them. He believed in making trouble, “good trouble”.

I had the opportunity to interact with Mr. Lewis many times during my tenure as President and CEO of the Congressional Black Caucus Foundation (CBCF). He served on my board, and he participated in various activities we sponsored such as the Annual Legislative Conference. When I reflect on the events that are most etched in my memory, they involve his interaction with the CBCF interns. He loved engaging with young people and looked forward to participating in their events. Through our digital history, Avoice project, we interviewed members of the CBC. For his interview, the student interns were invited to be the audience, and he enjoyed meeting them and answering their questions. The communications interns participated in the Selma, Alabama Faith and Politics Pilgrimage in 2012. The interns were in the lobby of the hotel when he came through one evening. They introduced themselves, and instead of shaking hands and dismissing himself after a long day, he spent time with them that they will never forget. That was the type person he was.

Congressman Lewis leaves a whole body of accomplishments, but there is one unfinished task that we at the Walters Center hope that everyone who loved him will help get accomplished. The provisions of the Voting Rights Act of 1965 that were invalidated by the Supreme Court decision, Shelby v. Holder need to be restored. Mr. Lewis did his part by fighting to get H.R. 4, the Voting Rights Advancement Act passed in the House of Representatives, but it is sitting in the Senate. What a great tribute it would be to the late Congressman to have the Voting Rights Act restored to its original purpose during this legislative session.

We offer our condolences to Rep. Lewis’s family and Michael Collins and his congressional staff. May the country never forget the many contributions he made to making the U.S. a better place to live.